When I ambled into our bathroom this morning, they were sitting in the shower. There were two of them, soft and infinitely squeezable, one for me and one for Pat. I am forbidden to touch hers.  We acquired these sponges on our visit to Tarpon Springs, Florida on Labor Day 2014.

This little town lies on the shores of the Gulf of Mexico, a few miles to the north of the much larger city of Tampa.  It is named after the breed of fish found in great numbers in nearby waters. Tarpon Springs also claims for itself the title of “Sponge Capital of the World” and for good reason.  The sponge beds on the ocean floor, just offshore, produce in abundance some of the finest sponges to be found anywhere.


Sponges were first noticed in the area in 1873, when they were simply a nuisance snagging the nets of local fishermen.  Yet many nuisances can be turned to good advantage and so were these when spongers came to the area to work the sponge beds lying just offshore. By the 1890s the locals began to develop a major sponge fishing industry and sponge packing houses were built in the town.  This attracted more spongers from Key West, Cuba and the Bahamas.

By 1900, the town was the largest sponge port in the United States.  The next step was to import Greeks to refine and expand the industry and make it more efficient.  500 Greek divers arrived together with the first mechanized sponge fishing boats. They came from the Dodecanese Islands of Greece.  Naturally they imported their Greek culture with them.  Greek restaurants, coffee houses and grocery stores sprang up to serve their community.


By the 1930's, the sponge industry in Tarpon Springs generated millions of dollars a year.  At one time long poles were primarily used in sponge fishing but, since so many sponge beds were at a depth of over 100 feet below the surface of the water and since the diving equipment of the time was primitive to say the least, being able to hold your breath under water was increasingly the name of the game.

Florida had a hard time in the 1920's. It faced destructive hurricanes and the collapse of the Florida land boom.  Then, like the rest of the country, it faced the Great Depression.  Surprisingly enough, Tarpon Springs survived this adverse economy and its sponge industry continued to prosper.  It is therefore ironic that the industry, having survived those hard times, collapsed a decade later when blight infested the sponge beds. Many of the sponges died.

Please think of sponges, as I did in the shower this morning when I squeezed one, as living things that come in a great variety of types. By the end of the 1950s, sponges were slowly starting to return to the sea bed offshore and, by 1970, the beds had regained their full strength. The industry has seen a revival in recent years. Sponge divers are still searching the waters of the coast off Tarpon Springs for sponges, which are then sold all over the world. It struck me that sponges are the ideal product for sale through online marketing.

The sponge industry is now mostly in the hands of people of Greek descent and they own most of the sponge boats.  A second irony is that income from tourism today provides Tarpon Springs with more than ten times the income that is derived from sponging. 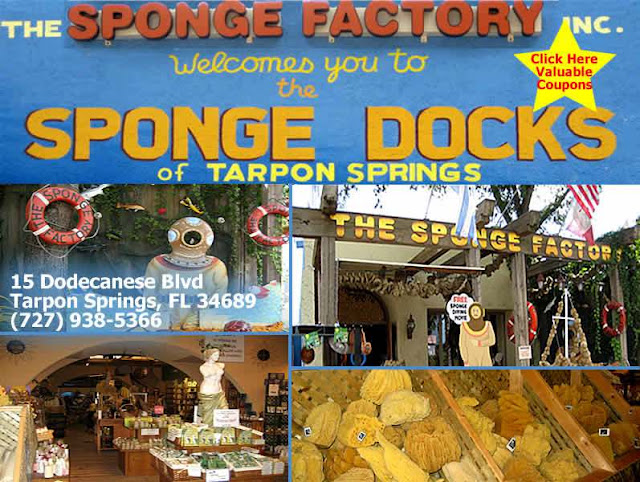 Thousands of visitors come to visit the Sponge Docks, see professional divers at work and soak up the Greek culture in which the town is steeped. Various Greek Orthodox churches in Tarpon Springs are also of interest.

Pat and I visited a cute sponge museum which exhibited a film showing how the industry developed.  That’s how I came to know the facts that I detail in this article. Tourists wander along the Dodecanese Boulevard with its unique Greek shops and enjoy traditional food and drink at the many Greek restaurants.


A visit to Little Italy, when we lived in Baltimore, was infinitely more affordable than an air ticket to Rome. Similarly a visit to Tarpon Springs costs a lot less than an air ticket to Athens for those in urgent need of a plate of Souvlaki or Moussaka, washed down by Retsina, an exquisitely unique Greek wine. We had a delicious Greek meal at Yianni's restaurant. Pat and I left this tiny piece of Greece in the middle of Florida more than satisfied with our visit. We shall return.


This story, written by Bob, was originally posted on our website September 11, 2014.