Cedar Key Florida - Early September Is Not The Time To Visit


Hurricanes have been mercifully absent from Florida since 2005, which was the last time one made landfall there.  That was so until late August 2016, when Hurricane Hermine gathered its strength in the Gulf of Mexico. Then, in the early hours of September 2nd, 2016, Hermine hurled itself ashore on Florida's Gulf Coast.

It tore a path through North Florida, before going on to cause hundreds of millions of dollars worth of damage in Georgia, The Carolinas, Virginia, Maryland, New Jersey and eventually as far north as Connecticut.  There was chaos along the eastern seaboard of the United States.  There were fatalities, very heavy rains and a widespread loss of power.

A few weeks after Hermine, Pat and I visited Cedar Key, which is an island on Florida's Gulf Coast a few miles to the south of where the hurricane made landfall. Cedar Key experienced storm surges from Hermine which were nearly six feet high and suffered damage of more than ten million dollars.The bars and restaurants on Dock Street took a particular beating, but thankfully nobody was injured.


Debris was still piled high around the island at the time of our visit, but this 700 strong community today depends on tourism, so every effort was being made to struggle back to normal.

Cedar Key seems to have drifted away from its natural habitat. Its atmosphere is more typical of the Florida Keys, the island chain lying off the Florida coast 400 miles to the south. It's out of place in its present location so far to the north and there's nothing quite like it nearby. However, it's good for Central and North Floridians to have easy access to such a wonderful resort without having to travel so far to the south.


Cedar Key is a great place to catch some fresh seafood. Pontoon boats with rods, bait and ice are easy to rent. They even come with a fishing license and a filleting service is available.

There's an annual seafood festival every October to feed seafood lovers who prefer to stay ashore, as well as some great restaurants open all year round.

We dined at Steamers Restaurant where the food and service are good but the views are spectacular. It's amazing this restaurant didn't suffer any damage in the hurricane where the one a few yards down was virtually destroyed.

Cedar Key has a long history by Florida standards. The British built a watchtower here in 1801, but the Spanish promptly destroyed it. A lighthouse was built in 1854.


The Island Hotel and Restaurant was built in 1859 and is still in business today in a central location. It's a real trip back in time and a must see on your list when visiting. Each of the ten guest rooms are decorated with its own theme. You can sit outside on the second story veranda and enjoy spectacular views. Breakfast is included. We didn't stay there but hope to on our next visit to Cedar Key.

In 1861 the first train arrived as Cedar Key had just become the western terminus of The Florida Railroad. Shortly after that, the island was the scene of several skirmishes in the Civil War.

It's really inaccurate to talk of "the island", because Cedar Key is in fact a bunch of islands, one of which (Way Key) is built up and is the scene of all the action.


In early September 1896, a more vicious hurricane than Hermine, with a ten foot storm surge, swept over the town and more than 100 people were killed. It seems that early September is the time to stay away from Cedar Key, because it was also attacked at precisely that time of year by Hurricane Easy in 1950 and Hurricane Elaine in 1985.


The Cedar Keyhole Artist Co-op and Gallery is a fabulous collection of arts and crafts from dozens of artists, most of whom do not live in Cedar Key. Attractively priced paintings are available for purchase and so are jewelry and pottery. The one with the largest selections of art includes an entire garden of whimsical statues and imaginative creations.

Cedar Key was named after the abundance of cedar trees to be found in the area and these were at one time used in the pencil making industry. Other industries that were once important to Cedar Key, included fishing, diving for sponges, oysters and clams.

The Cedar Key Historical Society recently opened a fine, well staffed museum to tell the story of this unique part of Old Florida. However, the museum was damaged in the hurricane and was still closed when we visited.


One of the many interesting places to stay on Cedar Key is the Faraway Inn. It is next to the beach and sustained a lot of damage in the hurricane. Half of its cottages were severely damaged. However, they still had several cottages available for rent when we visited. It's nice if you want your own little space next to the beach. There is also a lovely garden in the main area. 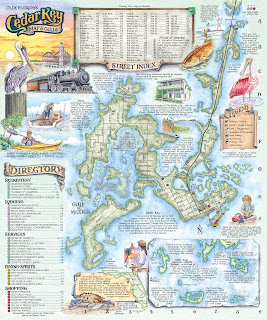 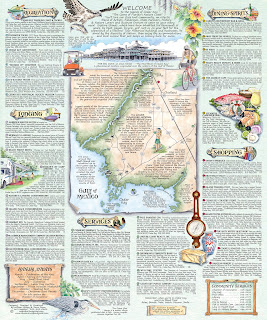 Is it a good thing that the role of Cedar Key today is primarily that of a tourist attraction?  Was its retreat from all its other activities caused by being regularly beaten up by early September hurricanes swooping in from the Gulf of Mexico? Probably not. Cedar Key is still a great place to visit - except perhaps in early September.


This piece, written by Bob, was originally published on our website July 22, 2017.