While driving all over Germany, Pat and I are always impressed by the excellence of the network of major roads.  Today, there is no speed limit on autobahns unless otherwise indicated.  Recommended maximum speed on an autobahn is 81 mph but, when we drive at that speed, other cars zip by us in the fast lane at speeds that make us feel we are crawling along.  I had always assumed that autobahns were created by the Nazis in order to move their armies around quickly.  However, the first autobahn was completed before that in 1932. It linked the cities of Cologne and Bonn. The then mayor of Cologne, Dr. Konrad Adenauer, was responsible for its creation.  Dr. Adenauer always liked to keep the little city of Bonn in the picture. He was removed from office by the Nazis in 1933 and was in a concentration camp by the time the war ended.  However, he became the first Chancellor of post war Germany, which found itself with a problem in 1949. It needed a new capital city, because it no longer had access to Berlin which was then cut off from the West by communism.  Which West German city should be chosen as the new capital? 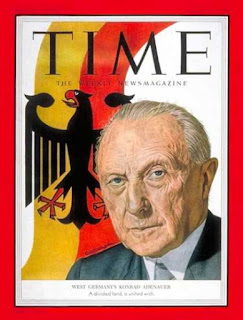 The answer to that question seems obvious from a quick glance at the map. The great city of Frankfurt would have been the natural choice. It is much more centrally located than Hamburg, Munich and Cologne – the only German cities, other than Berlin, with a larger population than Frankfurt. It was and is the largest financial center in continental Europe. It has one of the largest and busiest airports in the world. What more could a suitable capital offer? It seems natural to me, as a Londoner, to locate a country’s political, administrative and financial centers in the same city. That’s how Britain is organized and that’s just one more argument in favor of Frankfurt. The need to travel frequently on business between Washington DC and New York City must surely irritate many Americans.

Yet Frankfurt did not become the capital. The little city of Bonn, located on the River Rhine just a few miles to the south of Cologne, was selected and remained the capital, until Berlin resumed that role in 1990 at the time of German reunification. This illogical selection was the decision of Dr. Adenauer who, in those days, was a colossus towering over the German political scene.  It looked as if he would be chancellor for ever and he did not resign until the age of 87. He always loved Bonn.  A story, no doubt apocryphal but then in circulation, was that his infant grandson expressed a wish to be chancellor one day but that Dr. Adenauer replied that Germany could only have one chancellor at a time.  Pat and I passed through Bonn in August 2010 and it is unremarkable.  It was once the location of the largest US Embassy in the world.  It was the Baghdad of its day.  Bonn retains many of the administrative offices and jobs that it acquired during its years as capital. Many of the buildings, formerly used for parliamentary purposes, are now occupied by agencies of the United Nations.  Once Government has a foothold somewhere, it does not readily return an area to the private sector.

We know Frankfurt, better than we know Bonn, and we sometimes use its airport. We visited Frankfurt in February 2010 for the express purpose of seeing an exhibition of the paintings of Sandro Botticelli (1445-1510), which was being held at The Staedel Museum. For over two hours, we waited in a line outside the museum in the snow and ice in order to gain admission. It was well worth it.

Botticelli’s work embodies the beauty and grace of the Florentine school of the early Italian Renaissance. His most famous works include The Adoration of the Magi, Madonna and Child with an Angel, Primavera and The Birth of Venus. It is said that Botticelli’s model in the last named painting was a married noblewoman, for whom he carried an unrequited love. Botticelli never married and often said how much he hated the whole idea of marriage. He said it gave him nightmares, but he was no homosexual. At his request, he was on his death buried in The Church of Ognissanti in Florence, at the feet of the woman who was the object of his unrequited love.


The full name of the city is Frankfurt am Main. It stands on River Main and its name distinguishes it from a city of the same name in Eastern Germany, which stands on the River Oder.  If any American living in Germany becomes homesick for the skyscrapers of Manhattan or some similar US city, he needs to visit Frankfurt because it’s the only place in Germany with an abundance of skyscrapers.  Indeed, seeing Frankfurt on the horizon from a distance of thirty or forty miles, it looks just like a US city.  That is unique in Germany. Let it not be said however that Frankfurt has taken an American concept and given nothing in return. Frankfurt is the home of the highly spiced sausage known as the “frankfurter”, which is sold in beer gardens throughout the city. In about 1900, the frankfurter crossed the Atlantic and has since become very popular in America, where it is known as the “hot dog”.  Frankfurt may have missed out on becoming a temporary capital, but hot dogs will be eaten all over the world long after Bonn has been forgotten.