Strasbourg France - Home To A Tower of Babel

The Kunsthistorisches Museum in Vienna displays a famous work of art. It is the painting in 1563 by the Flemish artist, Pieter Brueghel the elder, of the Tower of Babel. Although the Bible does not specifically refer to the Tower of Babel as such, Brueghel clearly draws his inspiration from the reference in the Book of Genesis to the enormous tower built in Babylon. God was displeased with its builders, because they had built for the glory of man rather than in worship and praise of God. Accordingly, He came down and confused their languages and scattered the people throughout the earth, which is said to explain the origin of nations and their many languages. Brueghel’s painting depicts the tower as unfinished. There is a present day version of the Tower of Babel. It is also unfinished and is filled with nations using many languages and certainly not on the same wavelength. It is the European Parliament building in Strasbourg, France, which bears a marked resemblance to Brueghel’s painting. 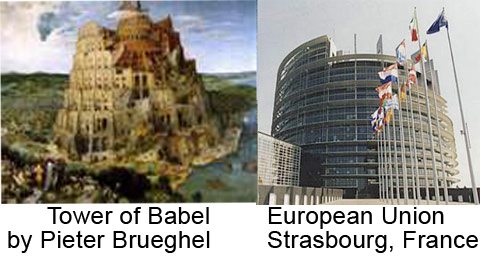 Pat and I visited Strasbourg in October 2009, because I particularly wanted to see the European Parliament building. The decision to locate it in Strasbourg was taken in 1952, right at the start of the move towards a European Union. Now that the Union includes 27 countries, with hundreds of millions of people not to mention its own currency, I anticipated that its Parliament building would be impressive and so it should be. A capital city is defined by its parliament building.


One cannot look across Washington DC and see the mighty dome of the Capitol without being impressed.

In London, one has a similar sensation when the Houses of Parliament and Big Ben come into view.

One of my favorites is Budapest, where the beautiful Hungarian parliament building sits on the bank of the River Danube in the center of the city.

Click this link Hungarian Parliament   to see a fantastic slide show on the Parliament. You will need to click on each slide to move forward. I don't know who to credit this to, but I didn't make the slide show.

Yet, in this respect, Strasbourg disappoints. The parliament building there is undistinguished. They claim that the building has deliberately been left unfinished to signify that the European Union is a work in progress, but that’s a poor excuse.

Notwithstanding this disappointment, Strasbourg is an interesting city with a fine cathedral. It stands on the French bank of the River Rhine at a point where that river presently forms the border between France and Germany. Its rich history began over 2000 years ago. The Romans chose the city as the site for their military camp on the Rhine, although they referred to it by the Latin name of Argentoratum. In those days, it was on the very frontier of the Roman Empire and played an important part in resisting the Germanic tribes to the north.

Between 1434 and 1444, Johannes Gutenberg was based in Strasbourg, while perfecting his printing press with moveable metal type. That event changed the world in the same way that the development of the internet has changed it in our own time. Then, in 1681, King Louis XIV of France marched his troops into Strasbourg and made it part of France, which it is today. However, in the interim, there have been two periods of occupation by Germany. It was a German city from 1870, as a consequence of the German victory in the Franco Prussian War, until 1918 when Germany was defeated in World War One. It was also occupied by Germany, during World War Two, from 1940 until 1944. Remarkably, the city was completely empty for nine months prior to that last occupation. When the British and French declared war on Germany on September 3rd 1939, the French immediately evacuated all civilians from the border city of Strasbourg and left just a few troops. However, the Germans did not march into Strasbourg until June 1940 when they invaded the whole of France.  This history has given Strasbourg a combination of French and German architecture and it is interesting to see the two contrasting styles as one moves around the city.

This piece, written by Bob, was originally posted on our website on January 26, 2010.