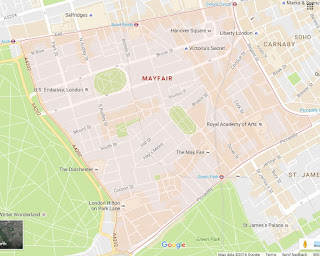 It's August 2016 and one of the richest men in the world died.  His billions could not protect him from a sudden and unexpected heart attack at the age of 64. He was Major General Gerald Cavendish, 6th Duke of Westminster. His inherited fortune was based upon his extensive ownership of real estate. The jewel in his crown was his collection of properties in Mayfair, an area of Central London containing the most valuable real estate to be found anywhere.

Mayfair is rectangular in shape and is little more than one square mile in area.  Its boundaries are defined by four of London's busiest and most famous streets.  They are Oxford Street in the north, Park Lane in the west, Piccadilly in the south and Regent Street in the east.

It was in Mayfair that I started work 63 years ago as a very junior clerk in a law office at 64 New Bond Street.  That office was at the intersection of New Bond Street and Brook Street. At lunch time, I would wander down New Bond Street past fancy restaurants in which I could not afford to eat and past great auction houses, art galleries and jewelers.

I would then arrive at the great hole in the ground where they were building a new hotel.  It was eventually to be The Westbury Hotel and it pleased me to watch the building workers slave away at the bottom of the hole, as I stood there in the viewing gallery eating my packed lunch.  It made me realize that I was more fortunate than many.

London's red "double-decker" buses ran along New Bond Street.  It was on the upper deck of one such bus that my employer at the law office met the same fate as the 6th Duke of Westminster, a fatal heart attack which had gone unnoticed until they went to ask him for his bus fare.

While The Westbury is today a fine 5-star hotel with an award winning restaurant, it is merely one of Mayfair's many world famous hotels. Had I walked west along Brook Street after leaving the office, I would soon have reached Claridges Hotel.

This was where foreign kings and presidents would stay when visiting London.  Claridges would fly at its entrance a huge version of the national flag of whichever head of state then happened to be in residence.  The uniformed doormen were so grand and intimidating that it was a long time before I plucked up enough courage to enter Claridges and enjoy cucumber sandwiches at tea time. Claridges stands at the corner of Brook Street and Davies Street, named after Mary Davies.  In 1677, she married Sir Thomas Grosvenor (an ancestor of the Dukes of Westminster) and brought into the marriage much of the Mayfair real estate they presently own.

We continue our walk along Brook Street and, after passing by Claridges and crossing over Davies Street, it leads us into a great square named after Mary's husband.  Grosvenor Square is known for good and for bad.

Among the bad are the violent demonstrations and riots in the 1960s in opposition to the Vietnam War.  These occurred in Grosvenor Square because this is where the US Embassy is located.  The huge embassy building occupies all of the western side of the square.  Incidentally, dozens of foreign embassies are located in Mayfair.

A good thing about the square is the statue of Franklin Delano Roosevelt, the 32nd and longest serving president of the United States. FDR is hugely popular with the British people because of his conduct during World War Two. The cost of that statue was met entirely by the small donations from many thousands of ordinary British people. They were grateful to FDR, as am I for another reason.  In the US, FDR instituted the social security retirement benefit scheme, which pays me every month.  Over half a century ago, I waited in line at the US Embassy in Grosvenor Square in order to obtain a visa to visit the United States. My 1963 visit across the pond was all too short, but hugely successful. However, at that time, I could not foresee the impact that the US Embassy in Grosvenor Square would have upon my later life.

Pat and I married years later in 1980, when she was serving with the US Navy and working just around the corner from the US Embassy in Grosvenor Square. Had she not been working there, I would never have met her.

Pat gave birth to our daughters in 1981 and 1982 and where did we have them baptized - in Mayfair of course, at the beautiful Farm Street Church.


For centuries after the creation of the Church of England in 1540, known to history as the Reformation, Protestants owned the Christian religion.  The practice of Roman Catholicism was forbidden and it was not until an Act of Parliament in 1829 that religious freedom was restored. The Jesuits were then able to build the Church of the Immaculate Conception on Farm Street, which they opened for worship in 1849. This probably makes it England's oldest Catholic Church.

There is so much about Mayfair that I have left unmentioned. There is no space to tell of the night clubs and casinos, the great mansions and the leafy squares. There are cozy pubs and fashionable mews dwellings converted from the days when horses were kept there.

Before ending however, let me touch upon the origin of name Mayfair. In the south western part of Mayfair lies an area known as Shepherd Market. It has a colorful history and its narrow alleys contain some interesting little shops, pubs and restaurants. In the 17th century, this area was a field on which in May of each year a 15 day fair was held, mainly for the purpose of buying and selling cattle. The field did not survive the onslaught of the builders and developers of the day, so the fair was discontinued. However, the name of the May Fair survives.

This piece, written by Bob, originally appeared on our website September 9, 2016.